Note: This is another in my sequence of post-Mystery-Hunt cryptics, which started with "Still There," "Post-Game Predictions," "The Sequel," "Power Lines," "A Lesson in Cryptography," "Yet More Villainy," "Further Escapades," "Time X*X," "Honeymoon in Segas," "If At First You Succeed", "Another One From The Vault", and "Next Winter: Wonderland"; this one was written before the 2016 hunt and refers to the 2015 hunt. The tag [NI2], as is usual in the National Puzzlers' League, indicates that an answer is in the 2nd edition of Merriam-Webster's New International Dictionary.

DAB
as told to Kevin Wald by Dr. N

Still fishing for Nautilodestones? Never fear! For the past year, I've been upgrading the submarine, so it can take us to the depths where 18 Bonus answers … uh-oh. I seem to have accidentally welded each Down clue to an Across clue, and that to a Bonus clue. Each welded Down-Across-Bonus clue sequence is preceded by its Down clue's number, and followed by its Bonus clue's enumeration and tagging; you will have to deduce the placement of the Across and Bonus answers, and the lengths, etc. of the Down and Across answers (which include two abbreviations and five phrases). Also, the welding accident has reordered the Across clues (which used to be in standard crossword order) so their answers are in alphabetical order; the same is true of the Bonus clues.

As you pull the clues apart and solve them, keep an eye out for my three amazing new inventions (I've installed six of each kind!):

(I) A magnetonomic sensor device. Six Down answers are one letter too short for their spaces, and thus they will "pick up" an extra letter. Left to right, these letters will identify this magnetonomic device I have invented.

(II) An extremely precise navigational device. Six Down answers are precisely the right length for their spaces; for each Across answer, count how many of these (if any) intersect it, and cross off that many letters from the start and from the end of the Across clue. Taking the Across clues in their pre-accident order, their first uncrossed letters will say where (in relation to the "picked up" letters from (I)) to find (reading left to right) a marine creature.

(III) A downward propulsion device. Six Down answers are one letter too long for their spaces, making them extend into the area below the given 12x9 grid. Bonus answers can then be interlocked with these projecting letters and with each other ("A" clues across, "D" clues down) to extend the grid further, mapping out an unexplored "trench" in the ocean floor (this extension will not be symmetrical in overall shape or bar pattern). Once this is complete, read the phrase given by the last uncrossed letters in the Across clues (in pre-accident order); for each Down entry from (I), if this phrase denotes n things, travel down n squares from its "picked up" letter. The squares you reach (left to right) will name a hero of a legendary realm who will help defeat the fearsome enemies lurking here.

Oh, didn't I mention them? For each Across clue with crossed-off letters, cross off that same number of letters from the start and end of the attached Bonus clue. Now arrange all the Bonus clues in their pre-accident order; their first uncrossed letters will describe your enemies, enabling you to find them.

Finally, note what letters of the alphabet your enemies possess; call these the "hostile" letters. The last uncrossed letters in the Bonus clues (in pre-accident order) will say where two invisible hostile letters, not yet written on the page, are hiding adjacent to your enemies. If you correctly guess what these are, and write them in, and shade in every hostile letter not in a Down or Across entry, you will get a Nautilodestone! (And if you then circle the letters of all the boldfaced things you have found, and read them top to bottom, you'll see another possible source for a Nautilodestone.) 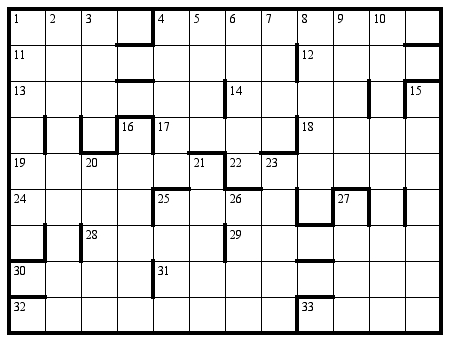