Note: This is another in my sequence of post-Mystery-Hunt cryptics, which started with "Still There," "Post-Game Predictions," "The Sequel," "Power Lines," "A Lesson in Cryptography," "Yet More Villainy," "Further Escapades," and "Time X*X"; this one was written before the 2012 hunt and refers to the 2011 hunt.

Honeymoon in Segas
by Kevin Wald

Mamma Mia! When Mario and Princess Peach went down to NYC for their honeymoon, Peach got kidnapped again, causing much confusion. (Specifically, in half of the Down clues, one word in the definition part is confused and must recover before the clue can be solved; for the other half, the answer itself gets confused before being entered.) As before, you must help Mario search for Peach through several successive video game worlds, scoring points along the way.

World 1: As you enter Across answers, two hostile entities will unexpectedly emerge from the grid; you must encage them in multiple boxes like the one attached to the top left corner of the grid. In addition, most Across clues are "mistaken," in that the string of letters clued by the wordplay has one incorrect letter; the correct letters (in clue order) will say what games these entities are from.

Unfortunately, because of all of these mistakes, you get no points for completing this round.

World 2: One unclued column in the grid indicates what "third-person shooter" video game this world corresponds to; the other says where you and your opponent must be for you to exit it. You can already see a couple of possible positions for each of you; draw the paths of the three shortest shots that might occur, assuming you and your opponent always get hit exactly in the middle of the broadest side.

Your score when you exit (if you don't know it yet) can be found by looking where the unclued columns intersect Across answers with non-mistaken clues; either the larger score or the smaller score is yours.

World 3: The incorrect letters from World 1, in clue order, form an appropriate two-word phrase indicating how the entities from World 1, and the game from World 2, combine to give the names of the two creatures from World 3 who have unexpectedly teamed up to kidnap Peach. Find all grid squares that touch, at a lower corner and nowhere else, the combined set of paths from World 2, and circle the letters inside to get a set of appropriate objects.

Use these circled letters to extract letters from the clues as follows: If any entry (Across or Down) has a circled letter in position n, take the nth letter of the corresponding clue. If you read the letters extracted from Across clues, and then those extracted from the Down clues, both in "natural order" (the order in which you encounter the objects used to obtain them, when traveling as you normally would) you will find out what to do with the objects to defeat the creatures; this will, of course, get you more points.

Final Runaround: Get to the one place where you can perform this action without any letters getting in the way, and perform it. Your current position now holds the defeated creatures, Peach and a sign (feel free to draw them all in, if you want). For each Across clue that intersects a circled letter, use its noncircled letters to extract letters from Down clues (wherever possible) using the same technique as before, in "natural order"; the resulting letter sequences, again in "natural order," will tell you what is written on the sign. Then do this again with "Across" and "Down" reversed; this will describe the audio you are now hearing, and will also give the wordplay part of a clue telling who the next Big Boss is… 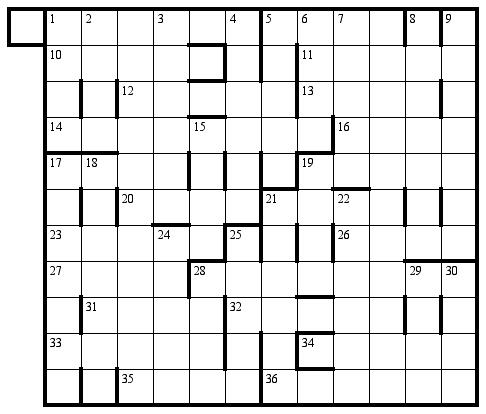 1. Manipulate a nib to produce word before "Birth" in the name of a Jewish service organization (1'3)
2. Sforzando syllables from ugly innkeepers vocally opposed to people using certain citadels (4)
3. Lab's stern mideastern leader, touching earth or soil (6)
4. Less enveloped by fibers Penny put into hay processor (6)
5. Small, small item that is struck from the Bible (5)
6. Perform in front of detective's perverse snog-recording device (4)
7. One biting piece of carrot or nut (5)
8. In Aragon, Mrs. Fine frames 50% of bylaws about things that make electorship work (7)
9. A war god Mr. Kaye beheaded for luring people with an iron fist (7)
15. Spoils topless coffee containers (4)
17. Soft food a friend supplies with the involvement of a powerful circle (7)
18. Short protrusion on each shoe (7)
19. Helmut's above stripping Vice President Humphrey (4)
21. Wee, wee arachnid clinging to Homeric character (6)
22. Spoofed Seuss, Malcolm, and Origen in England (6)
24. Mar bones of deity worshipped in Egypt before 502 (5)
25. Steal words from Parisian that embraces Old Testament (5)
28. Fifty stop Nola (4)
29. Coed used to transmit music in Numidia (4, abbr.)
30. Let no one see Dale when orating (4) Back to my home page.