Note: This is another in my sequence of post-Mystery-Hunt cryptics, which started with "Still There," "Post-Game Predictions," and "The Sequel"; this one was written before the 2006 hunt and refers to the 2005 hunt.

In the year since the 2005 Mystery Hunt, you have been patrolling the 13 east-west streets and 13 north-south avenues of Normalville Heights (seen as the grid lines in the map below) and have used your powers on some of them. Then recently, with no warning, another meteorite shower occurred! Fortunately, as before, the meteorites have given you a new special power, which will be of great use in the 2006 Mystery Hunt.

For more details, you must fill in the Normalville Heights map. As you enter words into this grid: 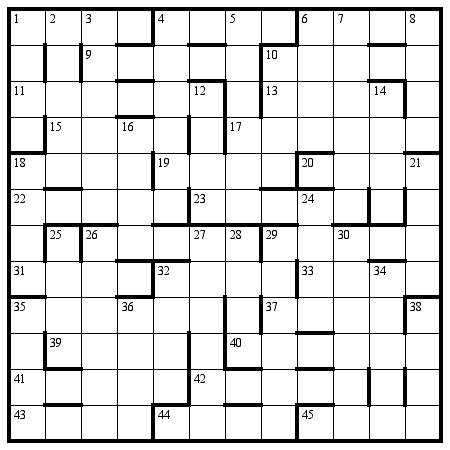 1. Put emphasis on addendum about legal matter
2. Franklin finally stops guiding philosophy of a nation
3. One-tiered seacraft from United Nations anger me
4. Safety devices protecting alien creatures before birth
5. Looked for typos in page a marsupial supplied
6. Alas, Mr. Solo goes in circles (2 wds.)
7. Cider drunk by "The Entertainer"
8. At first, Suzanne, Margaret, and Penny raced
10. Disparaging, reactionary noises from the Internet?
12. 501 eggs will be terrible
14. Exhausted by a bit of serious jail time
16. Apollo's mother's astrological sign
18. At a great distance from lover in Arkansas
21. Annoys real kings
24. Smell part of buffet, originally
25. Rabbitlike creature from hot region
26. Prayerbook from Yemen, oddly, in corridor
27. See waif disguised as a fish
28. Of two minds, finally, about nurse
29. Puts black stuff on noses
30. Loud aunt of Dorothy drinks with the girls, for example
32. Prate about being more liable
34. Okay about the Mexican jaguar or Bengal tiger
35. In speech, shows respect for Dr. Bohr
36. One number that is in a Broadway musical
38. Small creatures that are lousy pets