Note: This is another in my sequence of post-Mystery-Hunt cryptics, which started with "Still There," "Post-Game Predictions," "The Sequel," "Power Lines," "A Lesson in Cryptography," and "Yet More Villainy"; this one was written before the 2010 hunt and refers to the 2009 hunt. (The abbreviations 11C and NI3, as is usual in the National Puzzlers' League, refer to Merriam-Webster's Collegiate Dictionary, 11th ed. and New International Dictionary, 3rd ed.)

It seems like only a year ago we were escaping from Zyzzlvaria, and now here we are again. As before, this is a two-step process:

Part I: Inner Zyzzlvaria. For each clue whose answer intersects Inner Zyzzlvaria (the shaded region in the grid), you must determine the location of one vitally important letter! Namely, the letter that is not given by the cryptic part of the clue.

Part II: Outer Zyzzlvaria. Oh, no! A bunch of really important entities have gotten lost! To reflect this, for half of the remaining clues, the answer must be entered in a confused manner. (The resulting grid entries are all 11C words; they include four capitalized terms, which designate a book, city, lake, and river that are American, biblical, French, and German, but not respectively.)

The other half are more helpful, however. In each of these clues there is an extraneous three-letter sequence (trigram) in one word; this trigram must be removed before solving. These trigrams can be assembled to give a list of (pluralized) entities that might provide aleatoric felicity to those just starting out, along with the singular entity that controls them all! (The latter is not first on the list, but is in the first half.)

And that's not all. There are eight unclued entries in the grid that are also of value. Find these, and use the list of entities to reorder them (the first and last entries in the grid will remain first and last respectively in the new order). Then read the letters these entries (in the new order) have in the positions you found when you were just commencing this enterprise (in clue order), and you will all make . . . something! 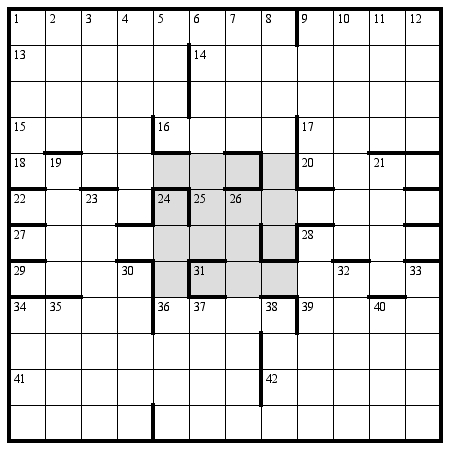