Note: This is another in my sequence of post-Mystery-Hunt cryptics, which started with "Still There," "Post-Game Predictions," "The Sequel," "Power Lines," and "A Lesson in Cryptography"; this one was written before the 2009 hunt and refers to the 2007 and 2008 hunts.

Yet More Villainy
by Kevin Wald

Two years after the evil 2007 Mystery Hunt, and a year after the murderous 2008 Mystery Hunt, yet another villainous entity is at large, and it is up to you to track him down and convict him. In the cryptic below, most answers must be altered before entry, and the alterations needed will help with these tasks. Specifically:

(A) For a few answers you must either change one letter to another letter (the same letters in each case), or delete a contiguous set of letters (again, the same letters in each case); a total of twenty letters will be changed or deleted. When you apply both of these changes to the name of a certain helpful person (the name is not on this page, but can be found elsewhere on my website), you will arrive at the name for the entity you are seeking.

(B) Proving it, though, will require more effort. If you research the name of this entity, you should find out not only what terrible villainy he embodies, but also discover a fact that will enable you to recognize his prints on sight. Twenty answers must be entered in the grid with one letter added; the added letter is different in each case, and if you draw lines to connect every pair of letters that is alphabetically adjacent, you will get the prints you need for proof.

(All tagging on clues, including [NI2] or [NI3] to indicate Webster's 2nd/3rd New International Dictionary as a source, applies to answers before alteration. Entries after alteration include one acronym and one two-word phrase.) 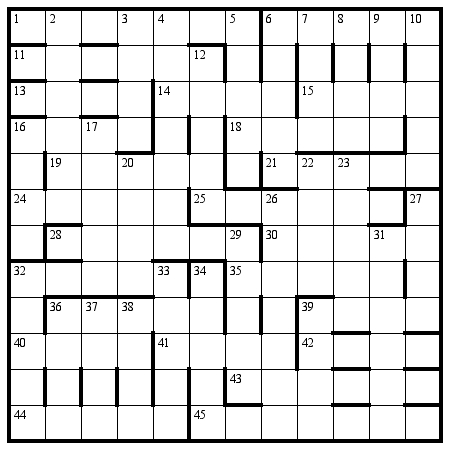 1. Was humiliated by shamus in a fight (2 wds.)
6. Masked mammals utter sounds that soothe Poles
11. Dad, of course, claims he beheaded people to get money
13. In X chromosome's first segment
14. Display how a kind of wave strikes your ear
15. Monkey with part of competition
16. Acoustic guitar player had to be an old Briton
18. Oho! Math is bewildering a former Primer Minister of Japan
19. Heading for the gutless schlep
21. Moneyman Donald tosses red clump of vegetation
24. Ceased to be colorful in speech
25. Help a donkey worshipper?
28. ... — and, surrounding it, other similar items!
30. Mideasterner, on returning, brains Mr. Fleischer
32. About one thousand, five hundred pages
35. Margaret is in love with a Lesbian character
36. Sit disheartened in a dandy setting for taking pictures (hyph.)
39. Badger's construction failed test
40. Niels, who studied particles carried on your tongue
41. Grey who did Cabaret number leaves Jay Leno reeling
42. Series of questions about masculine feller
43. Simon's hero gets weird kind of compliments [NI2]
44. Ultraviolet radiation produces these mutant ants
45. Beef fat covering Mark and Tina's skin

2. Island that has Pacific essentially all around!
3. In Chapter 1000, barely mention a small unit of resistance
4. Spies once again told Ms. Witherspoon to relax
5. Heard about pale creature
6. Collections of items NASA reconstructed
7. Copse conceals Saturn's wife
8. Where hunters search for a coin near the Rhine with ... (abbr.)
9. ... a feline old Roman politician
10. Quickly read through short novel by Kipling
12. Leader of Sparta upset soldier's mother
16. Penny ingests too much okra, perhaps
17. Companies start to advertise "coffee-free moccaccino"?
20. Actress Hatcher, in Anger Management, finally flipped
22. Discussed southeast Asian neckwear
23. Small-time philosopher
26. "Sex-limp" is mistaken for a non-compound word
27. Sermonizer wrecked this limo [NI3]
29. Behold the first of Borg's high-arching shots
31. A pitch beginning to interest a video game company
32. Source of cheer
33. Does impersonate cows and elk, mostly
34. Turned off, ultimately, by my bad parody
36. In favor of number being sung
37. One of seven primary bits of iniquity!
38. Pre-calc math is bound to come up
39. A religious group? C'est impossible